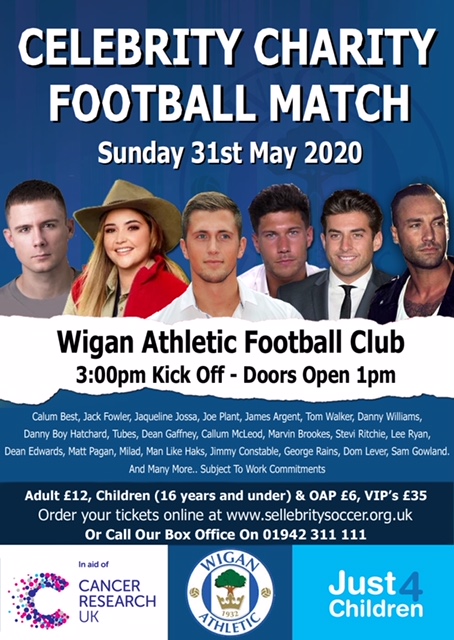 Celebrities, pop stars and sporting legends will come together this May to raise thousands for two fantastic charities, as Sellebrity Soccer heads to the DW Stadium!

Stars from TV, music and sport will all come together with former Wigan Athletic players for a fantastic afternoon of football, raising money for Cancer Research UK and children’s health charity, Just 4 Children.

Fantastic for families, the game will take place on Sunday 31st May 2020 at the DW Stadium Loire Drive, Robin Park, Wigan, WN5 0UZ, the match will kick off at 3pm – doors open at 1.30pm.

Tickets are on sale through the Wigan Athletic ticket office and online. They are priced at £12 for Adults, £6 for children under 16 and OAP/concessions.

VIP tickets are also available for £35, which include attendance in the VIP Lounge, VIP seats and a meet and greet with the celebrity players.

In the past ten years, Sellebrity Soccer matches across the country have raised hundreds of thousands of pounds for good causes.

Kevin Cooper, joint founder of Sellebrity Soccer, said: “We’re really excited to be hosting Sellebrity Soccer for the first time at Wigan Athletic FC. We’re delighted to playing at the DW Stadium and raising money for some fantastic charities – we’re hoping to make this the biggest one yet!”

Tickets are expected to sell quickly, so anyone interested should contact the ticket office soon on 01942 311 111. The office is open from 9am till 5pm, Monday to Friday, closed on non-match days and Sundays.

Players on the day include: